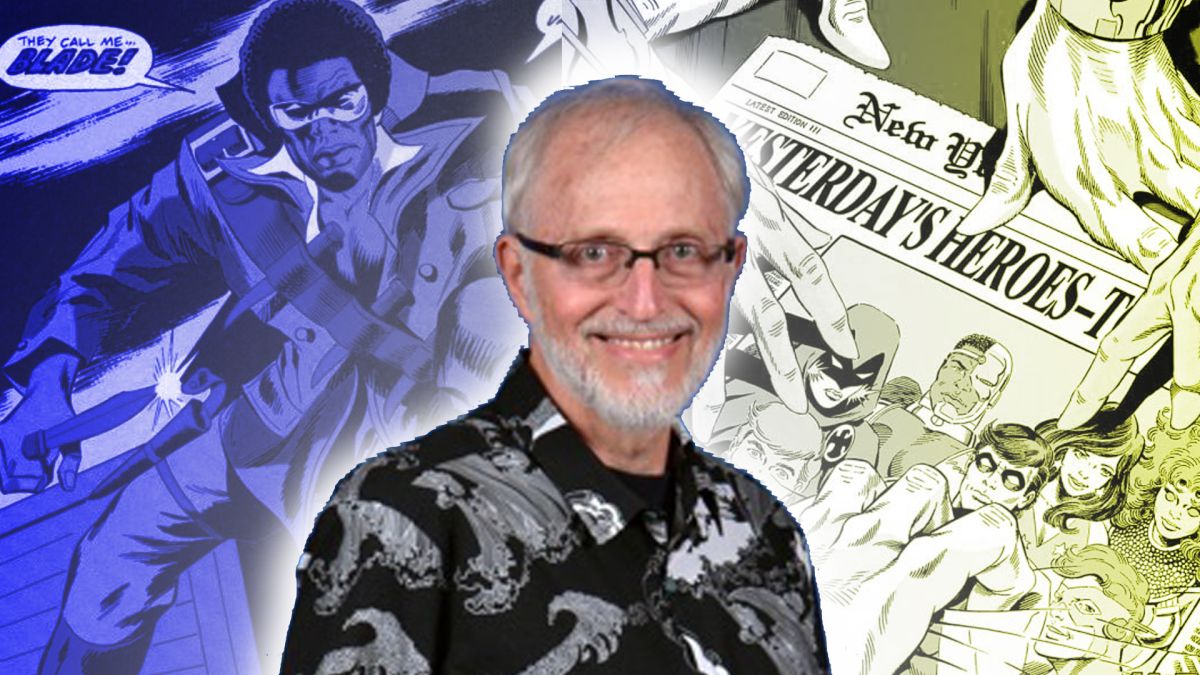 Over the past 50 plus years across thousands of pages, writer Marv Wolfman has created characters and stories that have stood the test of time. Many have gone on to become comic book icons, and others have found success in animation, television, movies, toys and beyond.

Newsarama now looks back on the Brooklynite’s career to count down his top 10 most successful designs – many of which were created with longtime friend and collaborator George Pérez.

By day New York District Attorney Adrian Chase fought crime in the courtroom, but at night he fought it on the streets as an armed Vigilante. Cut from the same fabric as the ’70s Charles Bronson and Clint Eastwood films, he was provoked after mobs murdered his family to continue fighting crime in his own way.

Chase would hang up his mask every now and then while feeling guilty for his actions – only to return later with an even more destructive attitude each time. The pressure eventually took its toll, leading to Chase taking his own life in the 1988 Vigilante # 50.

Over the years, many other characters, including those close to Chase, have taken up the torch from Vigilante, following in his violent footsteps. Now, Vigilante is set to jump into live action in a new way in HBO Max’s streaming series Peacemaker, played by Freddie Stroman.

Marv Wolfman didn’t create Dick Grayson, but made him his own man – as Nightwing.

After 44 years as a boy sidekick Robin, Grayson became Nightwing – and, surprisingly – he stayed. Over 30 years later, Grayson hasn’t returned to Robin – a true rarity in the comics as almost everything ultimately returns to the status quo.

Borrowing the Kryptonian superhero alias of Superman from a rare ’60s story, Wolfman worked with his frequent collaborator George Pérez to bring Grayson out of the shadow of Batman in the pages of New Teen Titans, moving from Robin to Nightwing. . This name and costume change created a firm break with the Dark Knight, with Grayson asserting himself not only as his own fully realized hero, but as leader of the Titans.

Grayson has ditched the Nightwing moniker from time to time – sometimes to temporarily take his mentor’s place as Batman, sometimes just as Dick or Richard Grayson – but in the minds of many fans, Nightwing remains the identity. of Dick Grayson’s definitive superhero.

Although he does not possess any superhuman abilities, Bullseye is a human assassin with the innate and uncanny skill of being able to throw anything with near perfect accuracy.

Designed by John Romita Jr., Bullseye debuted in the 1976s daredevil # 131 as a hired hitman, and over the years he has become the thorn in the side (and a sai through the chest) of Daredevil, Elektra, and Punisher.

Thanks to the lingering mysteries surrounding his past (even his real name remains officially unknown) and a series of seemingly fatal incidents, Bullseye still manages to stay relevant as one of Marvel’s most tireless and vicious villains, making still fearful in the hearts of the heroes he faces – even Daredevil.

When you say ‘big bad’, Anti-Monitor is perhaps the ultimate expression of the term – at least in the DC Universe.

Created by Wolfman, George Pérez and Jerry Ordway in Crisis on Infinite EarthsThe Anti-Monitor was the literal embodiment of anti-matter (the antithesis of everything we know and love) with the desire to conquer and destroy the entire DC Multiverse.

Anti-Monitor was initially defeated at great expense – he was indirectly responsible for the deaths of The Flash and Supergirl – although subsequent fights would be more easily won.

Recently, Scott Snyder reinstated Anti-Monitor to be part of a larger family of malicious cosmic beings born by Perpetua, a cosmic villain who made his debut in his race for the Justice League.

While people might think Black Cat was based on DC’s Catwoman, it wasn’t. In fact, she was based on the cartoon cat Tex Avery, Bad Luck Blackie, an anthropomorphic black cat who brought bad luck to everyone around her.

Originally intended to debut in Marv Wolfman’s Spider-Woman series, a change of assignment led the character (with a design by Dave Cockrum) to make his debut in the 1979s. Amazing Spider-Man # 194.

In the comics, Black Cat is Felicia Hardy – a second-generation cat burglar whose father encouraged her to pursue her dreams. When his father is arrested, Hardy assumes Black Cat’s identity to get him out – but things turn sour when he dies in the process. During the incident, however, she meets Spider-Man and begins a unique decades-long relationship that vacillates between friend, foe, lover, and confidant.

She recently completed her own ongoing Marvel Comics series.

Nova was one of Marv Wolfman’s first creations – in fact, he created the concept 10 years before Nova made his Marvel comic book debut.

Almost a decade later, Wolfman brought the idea for the character to Marvel, and, with some design tweaks by John Romita, Jr., Nova debuted in 1976 with The man called Nova # 1.

Teenage working-class hero Richard Rider paid homage to Spider-Man, but the so-called Human Rocket became his own hero – ultimately spawning his own intergalactic space force in his name: the Nova Corps, which developed. to encompass other Novas like Sam Alexander.

Despite his final years as a leading man, Deathstroke has never been what you would call a hero – in fact, by his own admission, he’s as selfish and staunch an operator as he is in the DC Universe.

Beginnings in the 1980s New Teen Titans # 2Deathstroke / Slade Wilson was a hitman who developed a personal vendetta against the Titans; one who only grew up when his children Jericho and Ravager got involved. Deathstroke’s unquenchable vendetta against the team led him to enlist the teenage villain Terra to infiltrate and betray the team in Wolfman and Perez’s “The Judas Contract” – still considered one of the best Teen Titans stories of. all the time.

Much like Marvel’s Punisher, Deathstroke’s popularity led him to become a full-fledged protagonist with a solo series starting in 1991 – with subsequent volumes flowing and even continuing to the present day.

In the wake of Jason Todd’s murder at the hands of the Joker, Batman needed a new Robin – but more importantly, the fans too. Wolfman and artist Pat Broderick delivered (and then some) with Tim Drake.

Beginnings in the years 1989 Batman # 436Tim Drake grew up in the role of Robin and has become, arguably, the greatest Robin. Always learning, always growing, Drake-as-Robin was a natural sleuth – and more of a thinker than a fighter – and became exactly what Batman, Alfred, and the fans needed in the wake of Todd’s murder.

After years as Red Robin (and a hot second as Drake), Drake recently reverted to the name “Robin”. He also turned out to be homosexual, starting a romantic relationship with his friend Bernard.

Decades before Buffy, there was another famous vampire slayer: Blade.

Created by Wolfman and Gene Colan to fight Dracula himself in the 1973s Tomb of Dracula # 10Blade was in stark contrast to other Marvel supernatural characters at the time, but became one of their most famous thanks to a series of popular films.

This vampire-hunter vampire quickly became a cult favorite, appearing occasionally with his own series in addition to staring in other books throughout the ’80s and’ 90s.

Then, in 1998, Blade hit a new peak of success – a movie. But better yet, a blockbuster movie. Wesley Snipes went on to play Blade in a trilogy of films, and in many ways set the stage for a subsequent big-budget Hollywood adaptation of the hits from the Marvel Comics catalog.

One of Wolfman’s most important qualities as a writer is his legendary ability not only to create new ideas, but to rearrange existing concepts into entirely new stories and characters.

in that vein, we present Wolfman’s greatest creation – the New Teen Titans. Borrowing the name and concept of the classic ’60s and’ 70s DC team, Wolfman and artist George Pérez brought a trio of all-new creations – Raven, Cyborg, and Starfire – and some existing but newly revamped heroes such as Beast. Boy, and mixed them up with the original ‘Fabulous Five’ Titans (Robin, Wonder Girl, Aqualad, Speedy, and Kid Flash) to create a more mature version of the Teen Squad to compete with the best-selling contemporary squad. from Marvel, the X-Men.

With much more adult concepts, a roster of characters with intimate and specific relationships that went beyond their costumes, and a healthy dose of real-life-style teen melodrama, Wolfman and Pérez totally revamped the concept of the Titans – and the teenage heroes in General – all while updating and creating a whole roster of DC characters who remain iconic to this day.