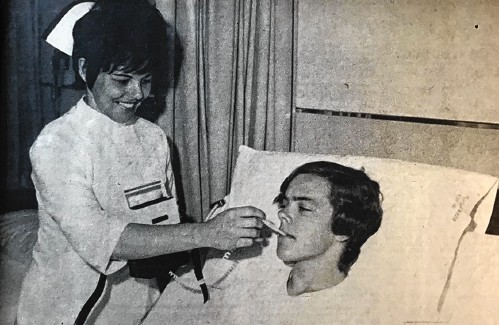 ■ At Cooley Dickinson Hospital in Northampton, taking a temperature is now as easy as pushing a button and inserting a probe. New electronic thermometers, being tested in several areas of the hospital, have been evaluated and discussed by medical and hospital staff and are now in use in most hospitals.

■ America was a nation without a plan today for the first time in 23 years due to a congressional standoff over attempts to force the US out of the Indochina War. The Selective Service system halted drafts of all men except the medics and informed those enrolled midway through the induction process to await further instructions.

■ Property taxes in Northampton, which will cover nearly half of the city’s newly enacted $ 43.4 million budget, will rise 4.4% over the next year, according to city officials’ estimates. Much of this increase comes from spending on upgrading and renovating JFK Middle School.

■ A comic strip by Werner Wejp-Olsen of Northampton, an illustrator of Danish origin, begins a two-week publication in the Gazette today. Wejp-Olsen, whose cartoons are unionized and appear in all major Scandinavian newspapers, offered his comic strip “Trendz” to the Gazette.

■ Robert C. Holub has agreed to step down as chancellor of the University of Massachusetts at Amherst within a year, but he could step down before that date if the university finds a replacement. Holub has been running UMass Amherst since August 1, 2008.

■ Southampton City Administrator Diana Schindler has resigned to accept a position on the Hampshire Council of Governments. His last day at Southampton will be July 29, leaving him just under a month to find an interim administrator and begin the search for a permanent replacement.